The numbers are in: This year has officially been CSLDF’s busiest to date. In a year of continued attacks on science, 2022 has seen 42 scientists, professors, and scientific research nonprofits come through CSLDF’s doors for legal advice and counsel.

A sampling of these cases: 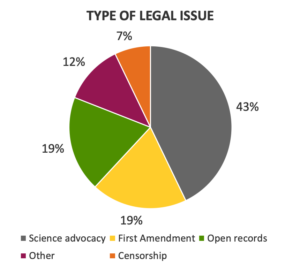 We published a new educational resource for scientists, How Scientists Can Participate in Government Rulemaking, available for free on our website. This guide, part of our Pocket Guide series, helps scientists understand how to safely and effectively participate in the important notice-and-comment process.

We submitted comments to the Biden administration in response to the White House Office of Science and Technology Policy’s request for information on developing a new federal scientific integrity policy framework. Our comments urged federal agencies to strengthen prohibitions against political interference, develop clear penalties for violations, protect scientists’ rights to publicly communicate their work, and make it easier for scientists to file scientific integrity complaints.

We co-authored a detailed report on the Supreme Court’s opinion in West Virginia v. Environmental Protection Agency, along with other science-forward groups. The report analyzes the West Virginia case, which seriously undercut EPA’s ability to regulate greenhouse gases, and suggests other ways the government may be able to prevent catastrophic climate change.

We held educational events for scientists and students to help them understand their legal rights and how to use their voices as citizens. These included workshops and talks at meetings held by the March for Science New York City, the Union of Concerned Scientists, the Geological Society of America, and the American Geophysical Union.

We were quoted and our work was highlighted in numerous news sources including Bloomberg, Nature, and E&E News. And CSLDF staff authored op-eds which appeared in Undark Magazine, The Hill, and other publications.

Finally, we have continued to monitor trends in climate misinformation as well as efforts by special interest groups to harass and intimidate climate scientists in order to delay action on climate change.

While CSLDF has faced its busiest year since our founding, for every scientist that we help, the challenges facing climate scientists continue to shift. You can help us protect the scientific endeavor in 2023 by making a year-end gift. A group of supporters are matching all contributions made through December 31, up to $15,000, so your gift will go twice as far.

As the year ends, we want to deeply thank everyone who supports our work at CSLDF. We wish everyone a healthy and peaceful holiday season, and we look forward to accomplishing even more for the scientific endeavor in 2023.