During the decade that CSLDF has been working to defend climate science and scientists, one of the biggest constants has been the misuse of open records laws against publicly-funded academics. 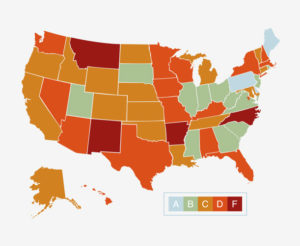 To further awareness of state open records laws—and how they’re used and abused—today we released the third edition of our report, “Research Protections in Open Records Laws: An Analysis and Ranking.” The publication includes a detailed breakdown of how each of the 50 states and the District of Columbia treat scientific and academic research under their open records laws.

Open records laws play a key role in promoting government transparency by enabling the public to request documents related to government-funded activities. However, the laws are often exploited by groups seeking to harass publicly-funded scientists and inhibit progress in climate science, biomedicine, epidemiology, and other critical areas of research.

, featured in our Scientists’ Stories page, is testament to how open records laws can be abused. Dr. Hughes studies climate data from tree rings, and he and his research became a target of politically-motivated harassment by climate deniers. Along with his colleague at the University of Arizona, he was subjected to repeated public records requests seeking thousands of emails. Over the course of a multi-year lawsuit, Dr. Hughes lost months of research to compiling and reviewing decades-old emails—as was required to respond to the legal requests of a group that disputed the scientific reality of climate change and openly admitted it was seeking records that “embarrassed” the professors and the university. Unfortunately, case ultimately ended with the group receiving much of what they sought; the judge recognized there were potential negative effects, but that better protections were a problem for the legislature and that scientists could use “alternative methods of communication” to collaborate.

The misuse of open records laws damages the scientific endeavor in many ways. It diverts researchers’ time, threatens their privacy, and chills free scientific inquiry and candid debate. It also provides opportunities for bad actors to take phrases, including scientific jargon, out of context and use these to confuse the public and sow doubt. Meanwhile, true scientific transparency—the publication of results and data, and efforts to replicate and reproduce these—is not furthered by reviewing old emails for “gotchas.”

Unfortunately, state open records laws have not improved since we published the first edition of the report in 2017. As we found earlier, just three states earned an A grade for their treatment of research: Delaware, Maine, and Pennsylvania. Most states received a C or D; the four states that earned an F have no open records protections for science.

In 2021, CSLDF has already heard from a record number of publicly-funded researchers who have been targeted by invasive open records because of their work. In particular, scientists who attempt to engage in climate policy or climate education, including debunking climate misinformation, have found themselves on the receiving end of open records requests that are designed to dissuade, distract, and silence their important work.

The report is intended to help scientists and attorneys understand the best way to manage and respond to a state open records request, and encourage policymakers to consider the special issues of scientific transparency and enact policies that protect these important materials.

Our attorneys are available to help individual researchers or university general counsels who are facing invasive open records laws. Please contact us at lawyer@csldf.org for a free, confidential consultation.