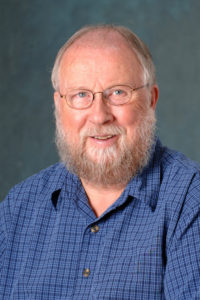 Malcolm Hughes is a dendroclimatologist and former director of the Laboratory of Tree-Ring Research at the University of Arizona. His work has contributed to the development of large-scale climate records through the use of proxy data (drawn from natural evidence of climate variability). Hughes has been on the cutting edge of using the data from tree rings in the broader field of climate research; he’s also been targeted by climate contrarians for more than 20 years.

Hughes is the third author, along with climate scientists Michael Mann and Raymond Bradley, on a series of papers that became known for the “hockey stick graph.” Their first paper, published in 1998, set out to create spatial maps of past climate using tree rings and other sources of proxy data; it showed that the global temperature has risen sharply since 1900. In 1999, the researchers published an extended reconstruction dating back to the year 1000 AD in Geophysical Research Letters, and further enhanced their results in 2008 and 2009.

The 1999 graph became a basis for the 2001 Intergovernmental Panel on Climate Change’s (IPCC) third assessment’s conclusion that the 1990s were likely to have been the warmest decade, and 1998 the warmest year of the past millennium in the Northern Hemisphere. The graph became a target for people who did not believe in anthropogenic climate change. They criticized the statistical techniques that had been used and argued that the Medieval Warm Period had been warmer than the hockey stick graph indicated. But over 24 other climate reconstructions produced using a variety of methods and proxy records supported the hockey stick findings.

Hughes became the focus of politically-motivated harassment in 2005 when House Energy and Commerce Committee Chair Joe Barton (R-Texas), a long-time climate contrarian, sent letters to Hughes, Mann, Bradley, and other scientists demanding they turn over information about their funding sources and their personal communications throughout their scientific careers—all within a few days.

“The implication of the letter was ‘we’re investigating you guys—you’ve done something bad,’” said Hughes.

Hughes desperately needed legal advice. Initially, his university’s general counsel urged him to cooperate. In fact, most of the data used in the hockey stick study were in the public domain when they accessed it, and details of his proposals were public information. Hughes, in collaboration with his university, sent the committee documents they requested.

Controversy exploded again in 2009. Emails of climate scientists at the University of East Anglia Climatic Research Unit were hacked and taken out of context as evidence of data manipulation by climate contrarians including Sarah Palin, Marc Morano, James Delingpole, and Lord Christopher Monckton. Hughes’ emails were among those stolen. Eight subsequent independent investigations of the hacking found no evidence of fraud or misconduct on the part of the climate scientists.

Nevertheless, in 2010, Senator James M. Inhofe (R-Oklahoma), chairman of the Environment and Public Works Committee, who once claimed that “man-made global warming is the greatest hoax ever perpetrated on the American people,” called for a Congressional investigation into 17 scientists associated with IPCC reports and the Climate Research Unit controversy, saying he wanted to pursue criminal charges. Nothing came of these threats.

Of Inhofe’s threat, however, Hughes said, “This is part of that campaign of delegitimization of science and scientists. They don’t have to prove we’ve done anything bad. They just have to raise doubt.”

Hughes says it’s the IPCC and its work that Inhofe wishes to discredit. And Inhofe has asserted that the IPCC is the primary basis for the Environmental Protection Agency’s endangerment finding for greenhouse gases—therefore it is also the basis for policies that seek to curb carbon emissions, which is what climate contrarians are ultimately fighting against.

Since 2011, Hughes and Jonathan Overpeck, his colleague at the University of Arizona and a lead author of the 2007 IPCC report, have been subjected to multiple public records requests from the Energy & Environment Legal Institute (formerly American Tradition Institute, a coal-company funded group). E&E Legal is seeking 13 years of documents and emails that were among those hacked in the Climate Research Unit controversy as part of its “transparency project,” investigating records from publicly funded institutions involved in climate change research.

The University of Arizona produced some of the documents but withheld several thousand others. They argued that the documents contained intellectual property, trade secrets, and prepublication data and drafts, and that it was “in the best interests of the state” to withhold them.

In 2015, the court ruled in favor of the university, saying that the emails did not need to be released. But, after E&E Legal appealed, the court reversed itself, asserting that trial judges must themselves examine records to determine if making them public would indeed be harmful to “the best interests of the state.” The University of Arizona is currently working on an appeal.

Like many scientists who must respond to public records requests, Hughes spent many weeks compiling the requested documents—time that could have been spent on his research. Hughes had used different computers, operating systems, and email over accounts over the years, further complicating the task. “I had to singlehandedly get all that together into one format so I could search it all for the very broad public record requests,” he said.

Hughes is grateful for the assistance and legal education provided by the Climate Science Legal Defense Fund. “Nobody needs to be the deer in the headlights,” he said. “People need to know who to contact as easily as they know 911 because that can… enable them to be informed and not just have to rely on their immediate superiors being well-informed or well-intentioned.”