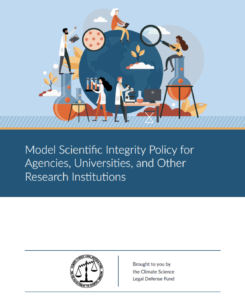 A critical part of addressing challenges to science-based policy in the United States is ensuring that federal agencies and research institutions have robust policies backed by strong scientific integrity cultures that ensure adherence to and rigorous enforcement of those policies.

The COVID-19 pandemic demonstrates the importance of such policies: The Trump administration and some state governments are silencing and ignoring scientific experts with disastrous results.

For example, in August, officials at the White House and the Department of Health and Human Services reportedly pressured the Centers for Disease Control (CDC) to loosen guidelines on when the “close contacts” of individuals with COVID-19 should be tested. This explicit politicization of what should be a science-based policy puts the health of U.S. citizens at risk. If the CDC had a stronger scientific policy, its scientists could push back against political pressure and insist on policies informed by science, because their agency’s policy would protect them from retaliation.

The Trump administration is also politicizing climate science. In one memorable instance from September 2019, the administration pressured leaders at the National Oceanic and Atmospheric Administration (NOAA) to publicly support the president’s baseless assertions that Hurricane Dorian threatened Alabama. Rather than bend to political pressure, NOAA leadership could have backed agency scientists and their ability to communicate critical information about hurricane risks. The actions by NOAA leaders were later found to violate NOAA’s scientific integrity policy.

Researchers experience the consequences of these failings in their professional lives. A 2018 survey of Environmental Protection Agency (EPA) employees found that almost 60 percent of respondents expressed concern about how scientific information is shared with the public, citing dissatisfaction with the consistency, transparency, and timeliness of procedures for releasing information. An even higher percentage of EPA employees expressed dissatisfaction with the culture of scientific integrity at the agency.

Adopting some or all of the provisions in our model language—and ensuring that employees understand them—can help research institutions avoid the distressing costs for public health and safety that result when science isn’t protected from political and other forms of interference.

If you have questions about our model language or scientific integrity policies at U.S. research institutions, please write to lawyer@csldf.org.