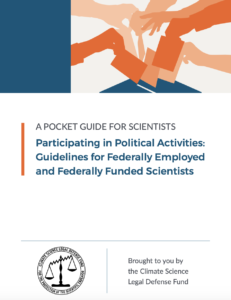 As the 2020 general election season collides with COVID-19, scientists are among the United States citizens concerned about the numerous unprecedented attacks on science by the Trump administration.

As a result, many researchers are eager to participate in electoral politics. Yet federally employed or federally funded scientists may be unsure how this status affects their ability to engage in such activities.

We’re pleased to announce our newest guide, Participating in Political Activities: Guidelines for Federally Employed and Federally Funded Scientists, which answers frequently asked questions on this topic. The guide helps researchers understand whether they can donate to a candidate, volunteer for a campaign, express their support for a candidate on social media, and other political activities.

From the early days of the Trump administration, it was clear that scientists were motivated to engage in the political process and show their support for science. Approximately 100,000 people—many of them researchers—attended the March for Science in Washington D.C. in April 2017. The number of scientists running for office has increased as well.

In 2019, more than 11,000 scientists signed on to a report warning of a global climate emergency authored by an international group of scientists. As described in The Washington Post, the report departed from other climate change assessments by straying into the political realm. “It [the report] does not couch its conclusions in the language of uncertainties, and it does prescribe policies,” wrote journalist Andrew Freedman in the Post.

COVID-19 has heightened concerns among scientists that politics are influencing the science-based response to the virus. Some researchers feel compelled to speak out about political interference as the crisis has unfolded, and many are trying to determine what role they can and should play in combatting misinformation about the coronavirus.

With this in mind, we anticipate that as the November election approaches scientists may have urgent questions about how they can participate in the political process. Our new guide describes best practices and offers advice on how to safely and effectively participate in political activities.

We’ve published other free educational guides for scientists on how they can engage in activism and advocacy, so scientists can participate in the political process fully and confidently.

The information in the guide isn’t a substitute for legal advice. Scientists with questions about their political engagement can contact us and request a free, confidential consultation with an attorney.