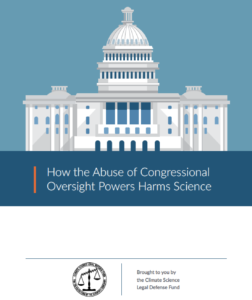 “How the Abuse of Congressional Oversight Powers Harms Science,” is a report on the damaging ways Congress has abused its power over science.

The report describes how, in numerous instances, Congress members and their committees have overstepped their boundaries, abused their authority, and wasted taxpayer dollars attacking science and scientists.

Abuse of Congressional powers is exceptionally harmful to the scientific endeavor. Investigations based on unfounded or fabricated claims have led to harassment of scientific agencies and individual scientists.

Such misinformation campaigns often damage scientists’ professional reputations, and the time required to respond to such inquiries takes time away from their work. The investigations have a chilling effect on climate and other types of research and create doubt around scientific findings that may save lives.

We must ensure that Congress’s powerful work is done within a framework that protects the scientific endeavor. To help with this transition, our report outlines reform proposals, benchmarks to evaluate Congressional actions, and opportunities for the scientific community to protect scientists.

Scientists with legal questions or concerns can contact us for a free, confidential consultation: Write to lawyer@csldf.org.