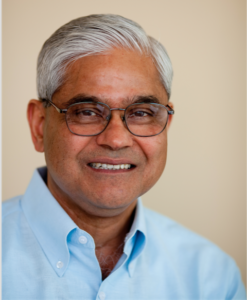 Professor Jagadish Shukla is a prominent climate scientist and a distinguished professor of climate dynamics at George Mason University. He founded the university’s Department of Atmospheric, Oceanic and Earth Sciences (AOES), and he is the author or co-author of more than 250 scientific papers.

He has also been outspoken about the role of fossil fuel companies in spreading climate misinformation and, as a result, has been heavily targeted.

In 2015, Shukla was the lead signatory among twenty other climate researchers, on a letter to then President Obama, expressing support for a recent op-ed in the Washington Post. The op-ed, by Senator Sheldon Whitehouse (D-RI), proposed investigating of some corporate opponents to action on climate change.

Dr. Shukla and other signatories to this letter became the recipients of hate mail, invasive open records requests, as well as online smear campaigns by climate denial blogs and conservative news outlets.

As the lead signatory, Dr. Shukla received the brunt of the targeting. Lamar Smith (R-TX), chair of the House Committee on Science, Space and Technology claimed that Dr. Shukla’s act of sending the letter was inappropriate “partisan political activity.” (Meanwhile, Rep. Smith received almost $800,000 from fossil fuel interests during his time in Congress; the oil and gas industry was his biggest donor.)

Although all of the signatories joined the letter as private citizens, Rep. Smith took the position that the letter was a product of the Institute of Global Environment and Society (IGES), Dr. Shukla’s research nonprofit. Rep. Smith’s claim was mainly based on the fact that a copy of the letter was inadvertently uploaded to the IGES website although it did not otherwise reference IGES and it was quickly removed when the mistake was realized.

Rep. Smith claimed that because IGES received government funding and the letter constituted “partisan political activity,” an investigation was warranted. This was in keeping with other actions of Rep. Smith: as chair of the House Science Committee, he launched numerous other investigations into climate scientists and climate activists, while also claiming that state investigations into companies like Exxon Mobil violated corporate First Amendment rights.

More than 20 websites – almost all supported by fossil fuel interests – published more than 140 articles with false information about Dr. Shukla. One of the blogs made the claim that Dr. Shukla ranked third among the scariest people of 2015 in the United States, which was later, repeated on Fox News. Rep. Smith used this misinformation as support for his investigation.

Shukla met with a group of several staff members of the committee and answered their questions, but the inquiry did not end there. Rep. Smith also wrote to the Director and the Inspector General of the National Science Foundation (NSF) to investigate NSF awards to IGES. The NSF Office of Inspector General (NSF OIG) conducted an extensive investigation; over 18 months, the NSF OIG asked for thousands of documents and computer files through several administrative subpoenas.

In November 2017, the NSF OIG completed the investigation concerning NSF awards to the Institute of Global Environment and Society, Inc. stating, “there is no evidence to substantiate the allegations. This investigation is closed and no further action will be taken.”

Despite the personal tolls from all of this, Shukla believes that:

“harassment by fossil fuel interests and politicians supported by them is a small price to pay for the integrity of science.”

Shukla admits that he:

“had never imagined that supporting a proposal by Senator Whitehouse to launch an inquiry about the climate misinformation would create such a massive attack from the fossil fuel interests. I was fortunate that CSLDF and [director] Lauren Kurtz gave me their full support just when I needed it the most.”

While the outcome of this investigation ultimately vindicated Shukla and demonstrated that the truth can prevail, climate scientists continue to be targeted for their scientific and climate advocacy work. Scientists who speak publicly about the urgency of taking action on climate change should do so thoughtfully, and be especially mindful to clearly separate their activities as private citizens from their professional roles.

Here are some resources we developed to help scientists navigate scientific advocacy and political harassment: Our Pocket Guide to Handling Political Harassment and Legal Intimidation, our Guide to What Scientists Should Know About Writing Open Letters, as well as our Pocket Guide to Advocating for Science in a Politicized Environment.

If you’re a scientist and would like a free, confidential consultation with one of our attorneys, please contact us at: lawyer@csldf.org.