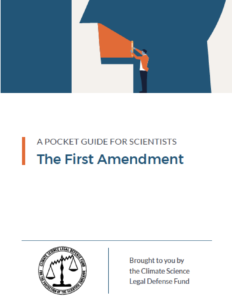 Today we published A Pocket Guide for Scientists: The First Amendment to help scientists understand how this amendment protects their free speech rights.

We wrote this guide so scientists can make informed decisions about how to safely and effectively participate in advocacy and activism.

The First Amendment protects scientists who engage in the political process and express their views in various ways, even if they work for a federal, state, or local government entity. But the location, nature, and subject of a scientist’s speech, and who they’re employed by can have implications for how the First Amendment protects a scientist against government action resulting from their activities.

Scientists are also citizens who increasingly speak out on issues involving their areas of expertise.

For example, in the lead-up to the 2019 United Nations Climate Action Summit in New York City, millions of people worldwide took to the streets to demand action on climate change. Many of them were scientists.

COVID-19 has similarly inspired many people in the health sciences to speak up. A group of scientists who were health officials in the Trump administration is organizing to strategize about setting the record straight on the administration’s response to the coronavirus pandemic while avoiding being scapegoated by former Health Secretary Alex Azar and other ex-colleagues.

Doctors, epidemiologists, and other scientists, many of whom are also moms, have formed grassroots networks to combat online misinformation about COVID-19 and vaccines.

Researchers also raise their voices about matters unrelated to science. After the killing of George Floyd in Minneapolis during summer 2020, scientists and scientific organizations around the world organized a Strike for Black Lives, “halting their usual work activities to learn about systemic racism in the research community and to craft ways to address inequalities.”

Scientists participating in activities like these should understand how various factors affect their First Amendment rights. Our guide helps scientists navigate the First Amendment so they can be involved in their communities and the political process while minimizing concerns about negative repercussions in their professional lives.

Download your free copy of A Pocket Guide for Scientists: The First Amendment.