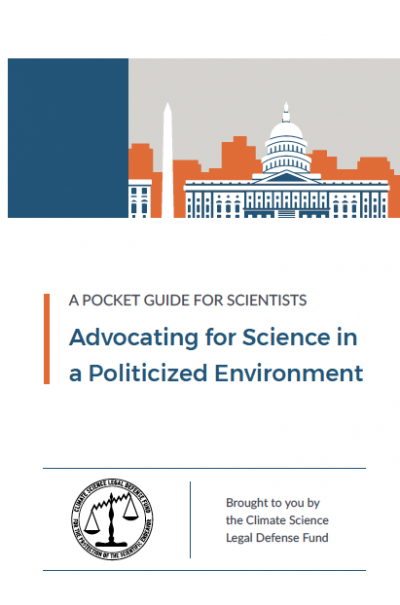 Today we published “A Pocket Guide to Advocating for Science in a Politicized Environment.” This new resource will help scientists from all disciplines understand U.S. anti-lobbying restrictions and other political laws, so they can safely and effectively advocate for the issues of importance to them.

In the face of efforts by federal, state, and local governments to silence science, a growing number of scientists in the U.S. are participating in activism and political engagement, especially around issues affecting science. And they have the right to engage in this kind of advocacy, even if they work for federal agencies or state-funded institutions.

However, well-meaning scientists have been accused of violating anti-lobbying laws when they’ve met with a Congressperson or even written an op-ed or public letter without the proper safeguards.

Linda Birnbaum, the director of the National Institute of Environmental Health Sciences (NIEHS), is one of these scientists. She co-authored a December 2017 editorial for PLOS Biology about the gaps in the regulation of toxic chemicals and she called for more research on the risks posed by these chemicals. It ended with the statement, “Closing the gap between evidence and policy will require that engaged citizens, both scientists and nonscientists, work to ensure our government officials pass health-protective policies based on the best available scientific evidence.”

This caught the attention of Republican members on the House Science Committee. They accused Birnbaum of lobbying, saying her statement was prohibited by regulations that forbid executive branch employees from lobbying Congress using federal funds.

Most experts agree that Birnbaum’s editorial did not constitute prohibited lobbying. As described in our guide, there is a prohibition against federal employees engaging in “substantial grassroots campaigns” to ask the public to contact Congress regarding a specific bill or legislative effort; the House Science Committee alleged that the closing line of the editorial violated this prohibition.

Birnbaum’s story illustrates how important it is for government-funded scientists to understand that while many forms of advocacy are perfectly fine to engage in, there are a few areas that deserve additional caution.

Science and scientists have a critical role to play in public policy and, so long as certain precautions are observed, they should feel free to engage in science advocacy.