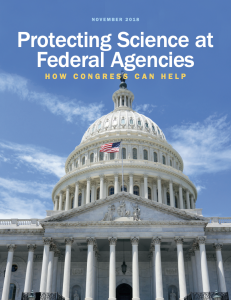 Today we released a joint report, “Protecting Science at Federal Agencies: How Congress Can Help,” that describes the tools Congress should use to bring back evidence-based policymaking.

Authored by 16 leading advocacy organizations, the report is part of an effort to remove political interference and protect the role of science in the policymaking process.

The 2018 midterm elections resulted in some fresh starts in Washington, particularly with respect to science. A record number of scientists ran for — and were elected to — Congressional office, and many others say they’re committed to correcting recent anti-science developments. We found the federal government has taken 171 anti-science actions since the 2016 U.S. presidential election.

Science-based governance is critical to ensure public health, environmental protection, and economic welfare. We hope the new Congress will use their powers turn back the tide on the Trump Administration’s efforts to sideline science. The stakes have never been higher.