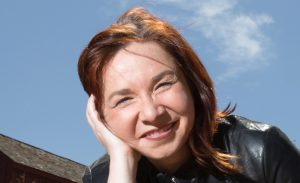 is an atmospheric scientist whose commitment to climate communication and public outreach has made her a prime target of anti-science groups.

A professor in the department of political science at Texas Tech University, and director of the University’s Climate Science Center, Hayhoe’s work is focused on establishing the scientific basis for climate change impacts on humans and the environment. Hayhoe is one of the lead authors of the 2017 Climate Science Special Report, a part of the National Climate Assessment; Fortune magazine named her one of the world’s 50 greatest leaders in 2017; and she frequently gives talks on climate science, climate communication, and faith.

Climate foes bothered Hayhoe for many years, but the personal attacks against her were amplified after an incident involving Georgia politician Newt Gingrich.

In 2007, Gingrich — at the time a Republican presidential contender — and biologist Terry Maple were writing a sequel to their book, A Contract with the Earth. Maple asked Hayhoe to write a chapter on climate change, requesting “a good opening chapter that lays out the facts on global climate change,” and “a sense of what needs to happen.” Hayhoe delivered the chapter in 2009 but, in late 2011, learned it was being dropped from the book because Gingrich wanted to appease voters who dispute the scientific consensus on climate change.

In December 2011, the Los Angeles Times published an article about the incident. Soon after, conservative radio talk show host Rush Limbaugh took aim at Hayhoe on his program and encouraged his listeners to harass her. Marc Morano, a former colleague of Limbaugh’s who frequently attacks climate science and scientists, vilified Hayhoe in a post on his blog, ClimateDepot, and published her email address so that his readers could send her hateful messages.

This was not the first hate mail Hayhoe ever received, but the messages that flooded her mailbox as a result of Gingrich and Morano’s actions were especially hostile. One email said, “You are nothing but a liar.” Another said, “Dumped from Gingrich’s book. Ha Ha Ha…See ya fraudster…get a real job, McDonald’s is hiring.” And, “Nazi Bitch Whore Climatebecile […] You stupid bitch, you are a mass murderer and will be convicted at the Reality TV Grand Jury in Nuremberg, Pennsylvania.”

Hayhoe says this was a watershed moment. She asked herself whether her work was worth the harassment. “I seriously considered, is it time to quit? Should I just pull my head back into the ivory tower and focus solely on research, or keep on going?” Hayhoe said. “It was a tough choice, but at the end of those weeks, I decided to keep on going.”

In 2012, the American Tradition Institute (ATI), a conservative think tank, filed the first of three Freedom of Information Act (FOIA) requests with Texas Tech University for Hayhoe’s email correspondence. ATI said they sought evidence that Hayhoe had misused public resources when writing her climate chapter for the book — even though writing chapters for books to be published by academic presses (as this one was), pro bono, is a standard part of any academic’s job description.

“The FOIAs were not a simple request for information,” Hayhoe said. “This was an indictment of my supposed crimes, followed by an assurance that they were sure that they would find proof of those crimes when they were able to search through my emails.”

The university fully complied with all the requests and ATI found nothing in Hayhoe’s communications they could take out of context or use to embarrass her.

“[FOIA requests are] definitely a scare tactic,” said Hayhoe. “The goal is to shut you up, to make you feel afraid, to make you feel like ‘I shouldn’t be saying anything because if I do, these are the consequences.’”

When the first FOIA request was made by ATI, the Climate Science Legal Defense Fund was just being formed, and Hayhoe didn’t know what “FOIA” stood for. So she contacted atmospheric scientist Michael Mann, his lawyer, and other climate scientists who’d been subject to FOIA requests to get advice.

“Having their calm assessment of the situation was very helpful,” said Hayhoe. ”If I hadn’t been able to call scientists who’d been through this before and legal experts who knew what they’re doing, I don’t know what I would have done.”

Hayhoe says her experience really exposed the ideological and political motives of anti-science groups. “There is no scientific legitimacy or genuine desire for truth,” she said. ”It is a political campaign to further political aims and they will do whatever they feel is effective, whether through intimidation or threat. Whatever the technique, the goal is the same — to introduce doubt and uncertainty, to question the science, and to stop action dead in its tracks.”

The harassment Hayhoe experiences has made her much more cautious about her personal and physical safety, as well as what she posts online. She is more careful about her email communication with other scientists and is very prudent about how she uses her university email account. But her experiences have not stopped her from speaking out. In fact, her outreach efforts have increased tenfold.

Hayhoe’s advice for young climate scientists who want to do public outreach:

Check out our Pocket Guide to Handling Political Harassment and Legal Intimidation for more information on how scientists can prepare and protect themselves from politically motivated attacks.

— Renee Cho is a blogger at Columbia University’s Earth Institute